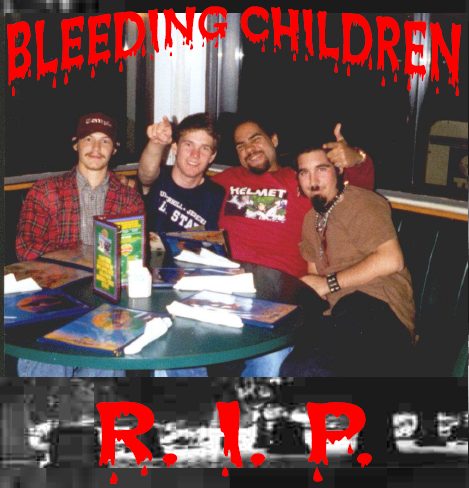 Atom and Jay started a band called anti-mainstream. That band did not last. Jay and Adam continued to write songs and combined forces with Rob then later with Gerry to form the punk band BLEEDING CHILDREN while at Burlington High School in Vermont. Bleeding Children was together for about 1 year from 1994 to 1995. Jay and Atom brought the songs imprisoned and land of dispair from the anti-mainstream days. Jay moved away near the end of 1995. We picked up Jim C. on Guitar and we morfed into a new band, originally called Drunken Monkey but in the end we went with the name Make It Stop.

RIP - We recorded most of our songs during Band practices (accept Utterlyhelpless), only a couple were not recorded. All of the songs were recorded at Bloodkeg Studios (a bedroom in Atom's house) on a 4 track recorder. They were originally released on cassette w/the name Bleeding Children. It was not released till after Jay moved. Later Atom converted it to CD and it was renamed R.I.P.

Utterlyhelpless - was recorded at a time when Jay returned for a visit. It was recorded with both Jay and Jim C. playing guitar.

Atom and Rev. Fred of Going Deaf are currently working to remix the R.I.P. album. We hope to finish it this year (2014) amongst our other projects.

This page was created by Atom L. Bomb BLOODKEG.